During the flu season or times of illness, people often seek special foods or vitamin supplements that are believed to boost immunity. Vitamin C and foods like citrus fruits, chicken soup, and tea with honey are popular examples. Yet the design of our immune system is complex and influenced by an ideal balance of many factors, not just diet, and especially not by any one specific food or nutrient. However, a balanced diet consisting of a range of vitamins and minerals, combined with healthy lifestyle factors like adequate sleep and exercise and low stress, most effectively primes the body to fight infection and disease.

A functional medicine approach to health care views nutrition as a major cornerstone to optimizing and maintaining your health throughout the aging process.

What Is Our Immune System?

On a daily basis, we are constantly exposed to potentially harmful microbes of all sorts. Our immune system, a network of intricate stages and pathways in the body, protects us against these harmful microbes as well as certain diseases. It recognizes foreign invaders like bacteria, viruses, and parasites and takes immediate action. Humans possess two types of immunity: innate and adaptive.

Innate immunity is a first-line defense from pathogens that try to enter our bodies, achieved through protective barriers. These barriers include:

Adaptive or acquired immunity is a system that learns to recognize a pathogen. It is regulated by cells and organs in our body like the spleen, thymus, bone marrow, and lymph nodes. When a foreign substance enters the body, these cells and organs create antibodies and lead to multiplication of immune cells (including different types of white blood cells) that are specific to that harmful substance and attack and destroy it. Our immune system then adapts by remembering the foreign substance so that if it enters again, these antibodies and cells are even more efficient and quick to destroy it.

Other conditions that trigger an immune response

Antigens are substances that the body labels as foreign and harmful, which triggers immune cell activity. Allergens are one type of antigen and include grass pollen, dust, food components, or pet hair. Antigens can cause a hyper-reactive response in which too many white cells are released. People’s sensitivity to antigens varies widely. For example, an allergy to mold triggers symptoms of wheezing and coughing in a sensitive individual but does not trigger a reaction in other people.

Inflammation is an important, normal step in the body’s innate immune response. When pathogens attack healthy cells and tissue, a type of immune cell called mast cells counterattack and release proteins called histamines, which cause inflammation. Inflammation may generate pain, swelling, and a release of fluids to help flush out the pathogens. The histamines also send signals to discharge even more white blood cells to fight pathogens. However, prolonged inflammation can lead to tissue damage and may overwhelm the immune system.

Autoimmune disorders like lupus, rheumatoid arthritis, or type 1 diabetes are partly hereditary and cause hypersensitivity in which immune cells attack and destroy healthy cells. Functional healthcare identifies and minimizes factors that activate auto-immune disorders which often allows the reduction of episodes, symptoms and the use of prescription drug use.

disorders can depress or completely disable the immune system, and may be genetic or acquired. Acquired forms are more common and include AIDS and cancers like leukemia and multiple myeloma. In these cases, the body’s defenses are so reduced that a person becomes highly susceptible to illness from invading pathogens or antigens.

What factors can depress our immune system? 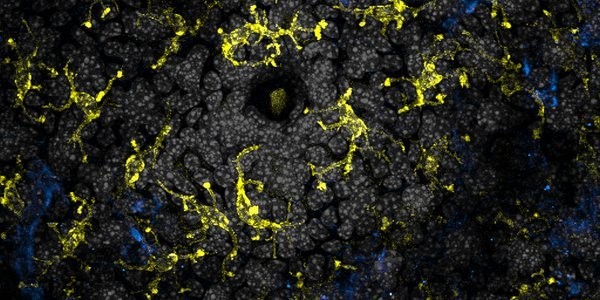 Does an Immune-Boosting Diet Exist?

Eating enough nutrients as part of a varied diet is required for the health and function of all cells, including immune cells. Certain dietary patterns may better prepare the body for microbial attacks and excess inflammation, but it is unlikely that individual foods offer special protection. Each stage of the body’s immune response relies on the presence of many micronutrients. Examples of nutrients that have been identified as critical for the growth and function of immune cells include vitamin C, vitamin D, zinc, selenium, iron, and protein (including the amino acid glutamine). [3,4] They are found in a variety of plant and animal foods.

Diets that are limited in variety and lower in nutrients, such as consisting primarily of ultra-processed foods and lacking in minimally processed foods, can negatively affect a healthy immune system. It is also believed that a Western diet high in refined sugar and red meat and low

in fruits and vegetables can promote disturbances in healthy intestinal microorganisms, resulting in chronic inflammation of the gut, and associated suppressed immunity. [5]

The microbiome is an internal metropolis of trillions of microorganisms or microbes that live in our bodies, mostly in the intestines. It is an area of intense and active research, as scientists are finding that the microbiome plays a key role in immune function. The gut is a major site of immune activity and the production of antimicrobial proteins. [6,7] The diet plays a large role in determining what kinds of microbes live in our intestines. A high-fiber plant-rich diet with plenty of fruits, vegetables, whole grains, and legumes appear to support the growth and maintenance of beneficial microbes. Certain helpful microbes break down fibers into short chain fatty acids, which have been shown to stimulate immune cell activity. These fibers are sometimes called prebiotics because they feed microbes. Therefore, a diet containing probiotic and prebiotic foods may be beneficial. Probiotic foods contain live helpful bacteria, and prebiotic foods contain fiber and oligosaccharides that feed and maintain healthy colonies of those bacteria. 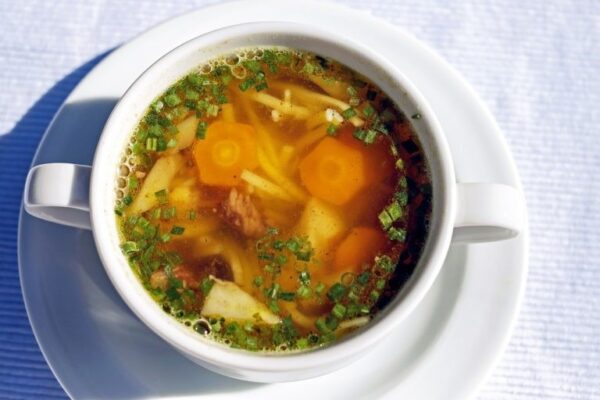 A warm bowl of chicken soup is a popular go-to when we’re feeling under the weather. Is there scientific evidence that it aids in healing? The short answer is no; there aren’t any clinical trials that show that chicken soup speeds healing any more than other foods. But when breaking down its ingredients, it does appear a worthwhile remedy to try. First of all, chicken soup is light and easy on the stomach when our appetite isn’t great. Second, it provides fluids and electrolytes to prevent dehydration, which can easily occur with a fever. Lastly, a traditional chicken soup recipe supplies various nutrients involved in the immune system: protein and zinc from the chicken, vitamin A from carrots, vitamin C from celery and onions, and antioxidants in the onions and herbs. This is one tasty and soothing food  to include when not feeling well and doesn’t need a doctor’s prescription.

Do Vitamin or Herbal Supplements Help?

A deficiency of single nutrients can alter the body’s immune response. Animal studies have found that deficiencies in zinc, selenium, iron, copper, folic acid, and vitamins A, B6, C, D, and E can alter immune responses. [8] These nutrients help the immune system in several ways: working as an antioxidant to protect healthy cells, supporting growth and activity of immune cells, and producing antibodies. Epidemiological studies find that those who are poorly nourished are at greater risk of bacterial, viral, and other infections.

Vitamin D’s role in regulating the immune system has led scientists to explore two parallel research paths: Does vitamin D deficiency contribute to the development of multiple sclerosis, type 1 diabetes, and other so-called “autoimmune” diseases, where the body’s immune system attacks its own organs and tissues? And could vitamin D supplements help boost our body’s defenses to fight infectious disease, such as tuberculosis and seasonal flu?

Eating a good quality diet, as depicted by the Healthy Eating Plate, can prevent deficiencies in these nutrients. However, there are certain populations and situations in which one cannot always eat a variety of nutritious foods, or who have increased nutrient needs. In these cases a vitamin and mineral supplement may help to fill nutritional gaps. Studies have shown that vitamin supplementation can improve immune responses in these groups. [8-10] Low-income households, pregnant and lactating women, infants and toddlers, and the critically ill are examples of groups at risk.

The elderly are a particularly high-risk group. The immune response generally declines with increasing age as the number and quality of immune cells decreases. This causes a higher risk of poorer outcomes if the elderly develop chronic or acute diseases. In addition, about one-third of elderly in industrialized countries have nutrient deficiencies. [8] Some reasons include a poorer appetite due to chronic diseases, depression, or loneliness; multiple medications that can interfere with nutrient absorption and appetite; malabsorption due to intestinal issues; and increased nutrient needs due to hypermetabolic states with acute or chronic conditions. Diet variety may also be limited due to budget constraints or lower interest in cooking for one person; poor dentition; mental impairment; or lack of transportation and community resources to obtain food.

A general multivitamin/mineral supplement providing the recommended dietary allowances (RDA) may be used in these cases, unless otherwise directed by one’s physician. Megadose supplements (many times the RDA) do not appear justified, and can sometimes be harmful or even suppress the immune system (e.g., as with zinc). Remember that vitamin supplements should not be considered a substitute for a good diet because no supplements contain all the benefits of healthful foods.

Several herbal supplements have been suggested to boost immune function. What does the research say?

During the COVID-19 epidemic, this article is of significant importance. The best way to avoid illness is prevention. A functional medicine approach personalizes a lifestyle for optimal health and illness prevention.